Burning passion for chronographs and cars

Those who know Bernd Joachim Hoffmann call him Bernie or B.J.
B.J.was born in Germany, but spent his first years in Vancouver ,Canada.
His love for cars developed in his early ages and in the elegant car of his uncle.
If you take a closer look you can see him proudly sitting in the famous Opel Kapitän of 1952. To be even more specific he is the right guy in the left window. 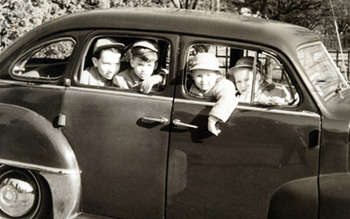 As soon he matured to a young man he graduated as Master of Business and administration and started his career in the tire industry.
This also explains why he is so close to cars and and all kind of mechanical toys and watches.

As a young student he already tested chronographs of Omega .On the picture you see B.J. as diver for the anthropologic museum of Mexico City. 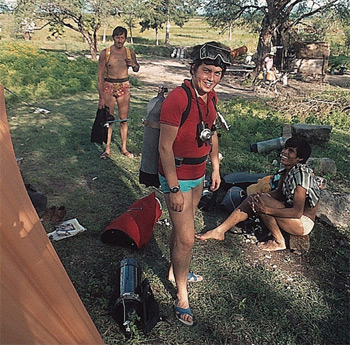 During his career he started to create watches for special on and off road purposes.
Being more than 25 years in the Goodyear Corporation and as Managing Director of the Fulda Brand, he developed a strong relation to the watch company Sinn in Frankfurt. First with Helmut Sinn, later with Lothar Schmidt the current owner of the Sinn brand and company.
Also Fulda tires has been the sponsor of the famous Yukon Quest an extreme dog sledge race over 1000 miles in Canada´s north, between Whitehorse and Fairbanks Alaska. 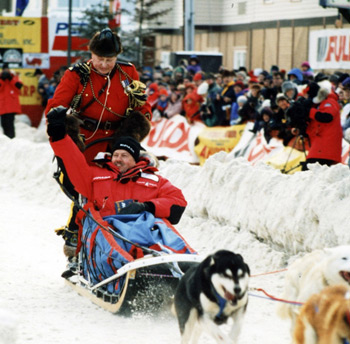 This was an extreme destination to test not only tires. The idea was born to test the first Sinn chronograph running at minus 45° based on a special synthetic oil.
Lothar Schmidt, owner of Sinn and Bernd J. Hoffmann equipped selected mushers at the Yukon Quest race with the Kristall Sinn watches for testing under extreme sport and weather conditions. 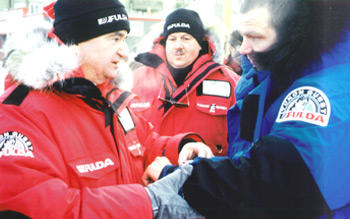 As result of this cooperation the Sinn Arktis extreme diving chronograph was born, resisting minus 45 °C and more.
Frank Turner and his lead dog who you can see on the picture was multiple winner of the dog sledge race. He was always relying on the Yukon Quest Sinn -Fulda Kristall Chrono. 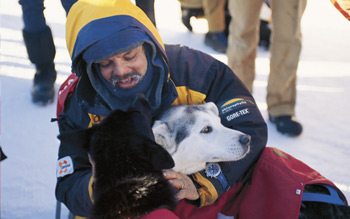 The Fulda Challenge in the Yukon was the most extreme winter sport event in Canada or even in the world.
This extreme sport event needs endurance, resistance and performance capacities. So it made perfect sense to test certain watches in this tough environment in combination with this extreme weather conditions.
The brand ambassador Markus Wasmeier and B.J. Hoffmann show the functions of the Sinn Fulda Challenge Chronograph at the Arctic Circle. 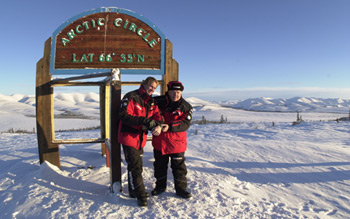 Legend says that it was a "very mild" winter day at the northern polar circle with only minus 30 ° C.
Another watch Bernie created was the Sinn Fulda 100 year chronograph. The template for this extraordinary timepiece were vintage car instruments like those of the Maybach SW 38, which you can see on the picture. 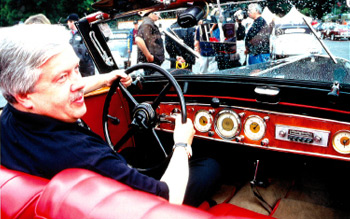 This special rally was another perfect combination for tire and watch presentation and marketing.
High performance cars and watches was the slogan, so B.J. took a special performance as rally driver sitting in a Porsche 356 Speedster. 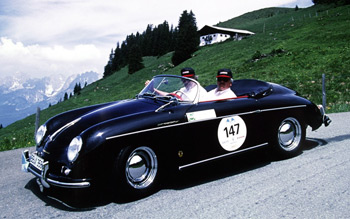 The Alpenrally in Kitzbühel was also the perfect location to present another masterpiece of the Fulda - Sinn cooperation the Fulda100 year anniversary chrono.
On the picture you see the former world ski champion Markus Wasmeier with Bernie presenting the chronograph with a special power reserve indicator, like a small fuel gauge. 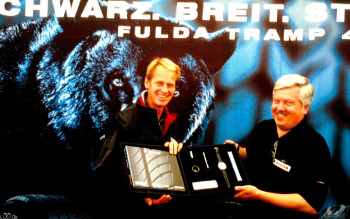 Surrounded by all the beautiful oldtimer the vintage rally event resulted also in the creation of the Fulda Sinn dashboard clocks which had excellent functionality, magnificent optics and stylish integration. (The picture shows the set in an Austin Healey 100) 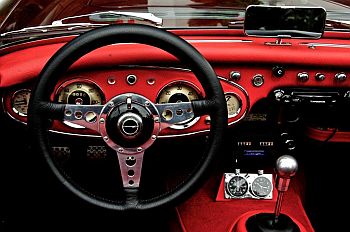 The Jaguar 140 XK DHC has one of the most elegant dashboards so it was more than designated to present the dashboard clocks. 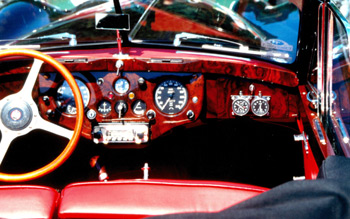 Bernd J. Hoffmann and his good friend Günter Grauel participated many years successfully at the Kitzbühel Alpen-Rally. You can see them in the fully restored Jaguar XK 140  DHC from 1957. 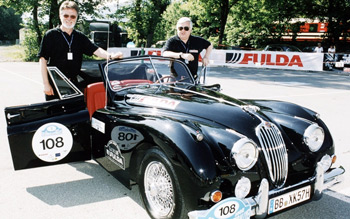 One of the highlights of watch concepts was the development of a very special rattrapante chronograph with split seconds function.
This watch is called Sinn Fulda Challenge Chronograph 958 and was limited on only 250 pieces. 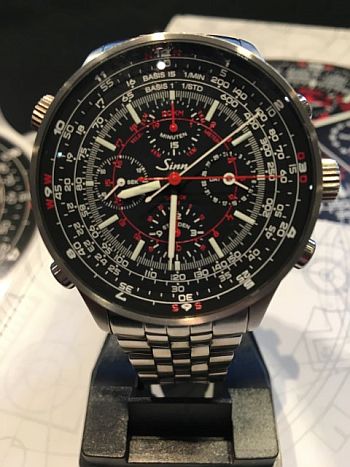 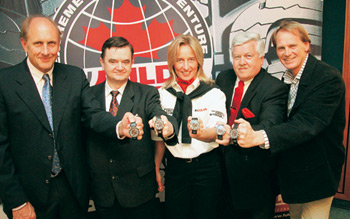 The most extreme car project  Maybach Excelero
Sometimes old historic roots created the base for innovative marketing ideas in the career path of Bernd J. Hoffmann.
The most extraordinary project was the buildup of the "Maybach Excelero in 2005. 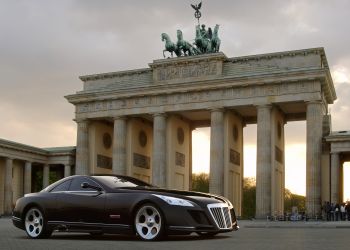 The idea was based on the old airstream car Maybach SW38 which was build for Fulda by Dörr&Schreck in Frankfurt.
In those days the airstream Maybach accelerated over 200 km/h, which was more than good enough to test the tires on the German autobahn in 1938.
The old project car helped the Mercedes board to approve very fast on the concept car. The concept behind this project was to build a sportive and elegant Maybach based on the existing Maybach S 57. 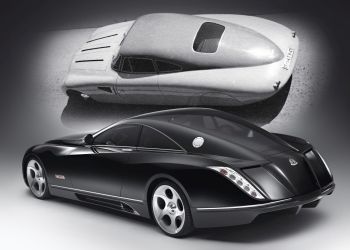 The Excelero concept car was developed in only 2 years. As in the past the car should test and present the extreme Fulda ultra high performance tire called Excelero up to 23 inch.
Here are some interesting facts:
- Fulda on one side Maybach on the other side
- Six very creative design students of the University of Pforzheim and the design company Stola united in Turino to realize this unique car concept in a short time.
- The Maybach Excelero was presented at the Motodrom Berlin with over 400 worldwide Journalists.
- At this time the speed marker of 351 km/h was already broken at the Nardo test track. 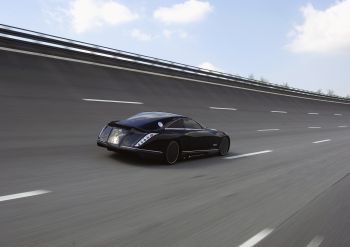 - The car was equipped with a 12 cylinder engine and over 750 PS horsepower with 2 biturbos.
- The Maybach Excelero was a car out of a different dimension, some called it the batmobile.
- On the picture you see Leon Hustinx former Director of Maybach, SLR and other exclusive products and Bernd Joachim Hoffmann who was chairman of the board of Fulda Tires and Managing Director in Goodyear at this time. 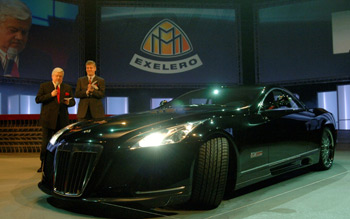 Classic Watch by Bernd J. Hoffmann
With the foundation of the watch company Classic Watch in 2010 a new area started.
Now handmade German watches and chronographs are 100 % in focus
Not only that the classic watch owner Bernd J. Hoffmann is selling watches on worldwide scale he also is trying to give good advice and help for watch enthusiasts and collectors.
Extraordinary car designs, sounds of a V8 engine and a general fascination of all kinds of vehicles and airplanes is what gives the input for other watch concepts and designs.
One example for this is our Sinn 103 St Sa RB Classic Watch model, which is limited on 100 pieces and only available at our shop. 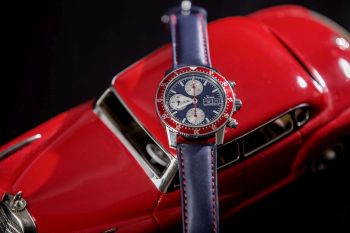 The design concept for this special timepiece arose from the innovative cockpit design of the Cessna 140.

In 2018 the opening of the new Sinn headquarter in Frankfurt Sossenheim with new production, sales and administration facilities was the right place to articulate the strong relation between Sinn and Classic Watch.
Out of the pool of vintage cars Classic Watch presented a German high performance car from 1955. A Mercedes 300 b Adenauer original a presidential car from Ghana, Accra Gold Coast Africa.
The picture shows left Lothar Schmidt owner of Sinn and Bernd J. Hoffmann owner of Classic Watch standing in front of the Mercedes decorated of course with the German and the Sinn standards. 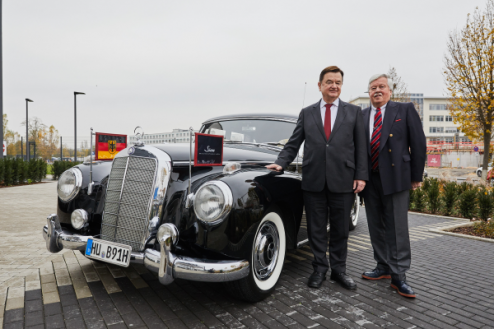